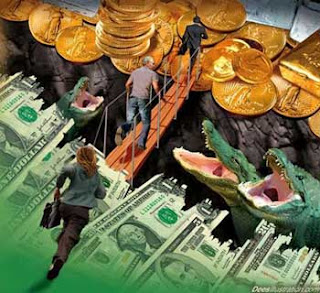 The Inevitable Collapse of the Dollar
November 16th, 2009

by Len Hart, The Existentialist Cowboy

Americans live beyond their means, Asia finances it and China props up the buck so that the US can buy Chinese made stuff at Wal-Mart. Eventually the Asians/Europeans will stop financing the USA, China will pull the plug on the buck and the bubble will burst.

If the GOP had been correct, US exports should have risen! The 'balance of trade deficit' i.e, the NEGATIVE Current Account Balance would have been reduced! If the GOP had been correct, the US could have paid off huge amounts of national debt run up in incompetent and dishonest GOP regimes. The US might have survived decades of conservative budgets which forced the US to borrow from other countries. But --not surprisingly --things have not worked out as the GOP would have you believe.

Many economists, myself included, believe that China’s asset-buying spree helped inflate the housing bubble, setting the stage for the global financial crisis. But China’s insistence on keeping the yuan/dollar rate fixed, even when the dollar declines, may be doing even more harm now.

Although there has been a lot of doomsaying about the falling dollar, that decline is actually both natural and desirable. America needs a weaker dollar to help reduce its trade deficit, and it’s getting that weaker dollar as nervous investors, who flocked into the presumed safety of U.S. debt at the peak of the crisis, have started putting their money to work elsewhere.

But China has been keeping its currency pegged to the dollar — which means that a country with a huge trade surplus and a rapidly recovering economy, a country whose currency should be rising in value, is in effect engineering a large devaluation instead.

It was hoped that by taking the dollar off the gold standard, US products would enjoy greater sales abroad. But like 'trickle down theory', it just has not worked out as planned. The CIA's World Fact Book proves it.

The enormous scale of foreign borrowing and money creation necessary to finance Washington’s wars are sending the dollar to historic lows. The dollar has even experienced large declines relative to currencies of third world countries such as Botswana and Brazil. The decline in the dollar’s value reduces the purchasing power of Americans’ already declining incomes.

Despite the lowest level of housing starts in 64 years, the US housing market is flooded with unsold homes, and financial institutions have a huge and rising inventory of foreclosed homes not yet on the market.

Industrial production has collapsed to the level of 1999, wiping out a decade of growth in industrial output.

If the US is a 'failed state', it is because it has been impoverished by at least two trends: 1) the transfer of US wealth upward to just one percent of the US population which now owns more than 95 percent of the rest of the nation combined; 2) the decline of the US dollar, a trend begun when Richard Nixon eschewed the Bretton-Woods agreement.
Reducing the chances that we will weather this crisis are US wars of aggression which benefit only the defense contractors. Wars, in fact, reduce the GDP, destroy jobs, reduce productivity, and increase the trade deficit! If wars are so 'bad' for the economy, then how are they sold so easily? Why are they 'sold' at all? The quick response: they are sold with focus group tested bullshit!

There's a 'living' in killing, we are told! It's a lie -- snake oil for idiots and rank and file GOP. That wars are good for the economy is just a bald-faced lie cooked up by the defense lobby for whom killing IS a living but only for the shrinking one percent who benefit: the Military/Industrial complex.

In fact, most models show that military spending diverts resources from productive uses, such as consumption and investment, and ultimately slows economic growth and reduces employment. In this way, military spending is comparable in most models to any other form of government spending, such as spending on public goods or improving the environment.

This paper shows the projections of the impact of an increase in annual military spending equal to 1 percent of GDP (approximately the actual increase in spending compared with the pre-war budget) of the Global Insight macroeconomic model (see Appendix). The Global Insight model was selected for this analysis because it is a commonly used and widely respected model.1 Other models will show somewhat different projections, but it is unlikely that the direction of the long-term impact on any of the key variables will be different. In fact, because of the structure of the Global Insights model, it likely understates the negative impact of military spending relative to other models.

The Inevitable Collapse of the Dollar

Americans are living beyond their means and Asia is currently financing that. But eventually the Asians/Europeans will stop financing the USA and then the bubble will burst.